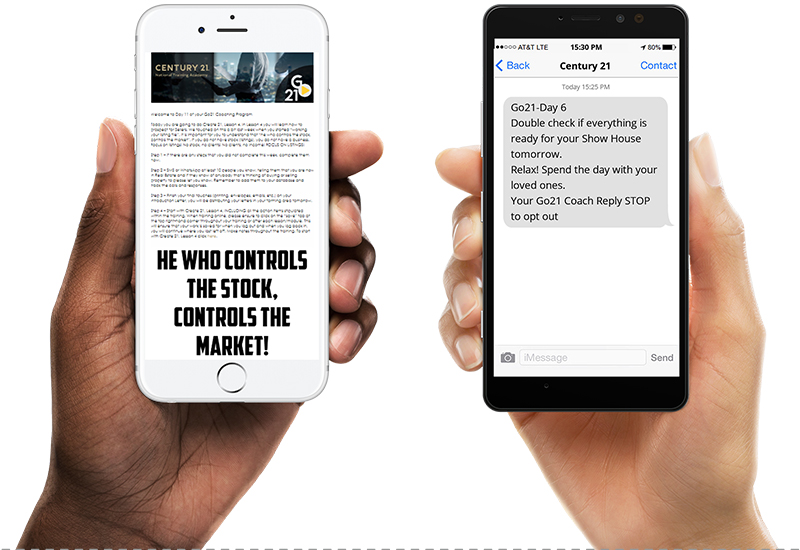 Go21 is an estate-agent coaching programme created by Century 21; the world’s largest real estate franchise. The programme provides real estate agents with a step-by-step guide to selling property, including subjects like getting to know their areas, completing the necessary paperwork, and running their first show house. Activities include things like two presentations a day, two hours of lead generation per day, and more.

Century 21 needed a system that would automatically send new agents on an email and SMS training journey that they could actively track and report on.

What Century 21 needed was:

Century 21 created a workflow in Everlytic that enables the Go21 programme to send automated emails to the agents every weekday. SMSs are also used for reminders and to make agents feel like they’re not alone, sending them inspirational messages to keep them motivated.

The average email statistics that Century 21 has seen with their Go21 workflow has been phenomenal. On average, open rates across the entire campaign are 45% (more than 20% higher than our 2020 benchmarks) and click-through rates are 37% (higher than 2020 overall benchmarks). This shows how relevant content can help improve engagement metrics.

As for SMSs, 96% of them were delivered across all campaigns. This helped to keep the programme top of mind. Engagement statistics are a bit harder to measure as the SMSs didn’t contain any links for Everlytic to track.

Once completing the programme, agents generally make at least one sale. In fact, one agent made as many as five sales in the 13-week period. The agent’s explanation? “I didn’t have to think; I just had to read and do.” This shows agents, franchise buyers, and even other businesses how successful the Go21 programme and messaging automation can be.

“It works like a plug and play. Once the workflow is set up, we just load the new agents into the system and the rest happens automatically. It really makes life much easier and we have seen great results from the programme.”

Here are the business benefits and features that aided and continue to aid in the success of this programme:

When Century21 first launched their training programme, it was manually managed by Head Office via their online academy. They were unable to see who had received, opened, or clicked on the emails, but now that they use Everlytic, they can. This means that Century 21 can pick up the phone if they see someone hasn’t yet opened an email and give them a nudge. They can also see immediately if someone is dishonest about receiving the email.

Everlytic saves Century 21’s Head Office a lot of time that it would have spent manually sending communications. Since launching the Go21 training workflow, they’ve seen an increase in productivity as the programme drives and guides the agents every day, like a personal coach. This programme allows Century 21 to efficiently manage their agents without having to continuously pick up a phone and drive the process with them directly.

Everlytic’s messaging automation has also allowed Century 21 to have less in-person training at their offices. The email and SMS-based system lightens the burden on their human and physical resources, making work life easier for everyone involved.

With the ability to track engagement via email delivery, opens, and clicks, Century 21 is also noticing that agents are selling real estate sooner than they were before, as they get up to speed a lot quicker. By providing personal, continuous support and step-by-step guidance with Everlytic’s automation workflow, Century 21 and its agents have made a great success of the Go21 programme.

Want to learn more about using bulk, automated communication to boost relationships in your business?